Huffington Post (Op-Ed): The Intervention of Richard Spencer and the Alt-Right 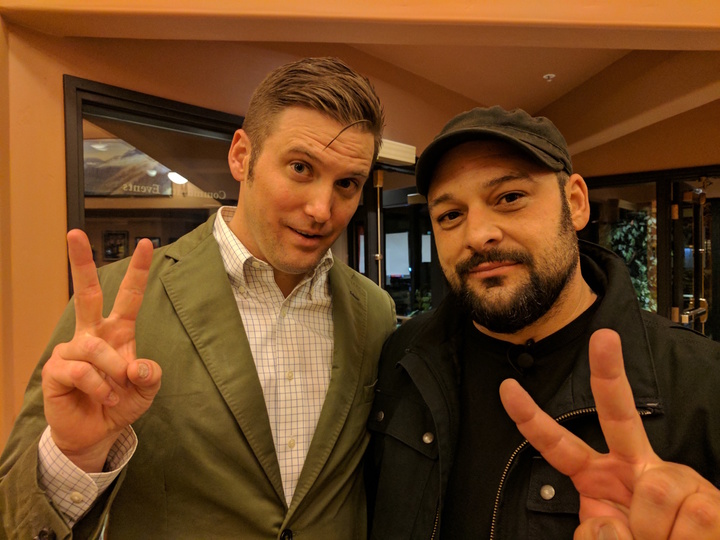 Here’s what happened when Spencer, the prominent white nationalist, agreed to talk with me, a former skinhead now dedicated to dismantling the movement I helped create.

I’m a former neo-Nazi skinhead leader who, having left a life of hate behind over 20 years ago, has spent the past 15 years helping people disengage from the very same movement I helped build. I was recently invited to Whitefish, Montana by the Human Rights Network to address the community-at-large – a population recently terrorized by an online cadre of white supremacists. And it was there that I came face-to-face with “Alt-Right” poster boy Richard Spencer.

I had invited him to a lecture I was giving in town. Call it a gentle taunt or soft troll on my part, but Spencer showed up. And I was delighted.

Let me be very clear: I despise the ideas that Richard Spencer spews forth and what the rally in Charlottesville stood for. I despise them because they were once my own–the same misinformed and dangerous ideas I deployed to manipulate vulnerable people 30 years ago. The look may be different today – the shaved heads and Doc Martens replaced with smart suits and “fashy” haircuts – but the scam, and danger, remain the same.

For those unfamiliar with recent events in Whitefish, let me catch you up. Rallied by the popular white nationalist (read, “neo-Nazi”) website Daily Stormer and its founder Andrew Anglin, an anti-Semitic “troll storm” and virtual hate campaign were unleashed upon a local Jewish realtor involved in a trivial business dispute with Sherry Spencer, Richard Spencer’s mother. Spencer splits his time between the Washington D.C. suburbs and Whitefish, where his mother, his Russian-born wife Nina, and their two-and-a-half-year-old daughter live full-time. The attacks escalated further when the local rabbi also began receiving death threats, many in Whitefish’s Jewish community had their home addresses and phone numbers maliciously published online, and an armed white supremacist march down Main Street was threatened. The Southern Poverty Law Center recently filed a federal lawsuit against Anglin.

As the Q&A following my talk wound down, it was clear that the populace remained deeply shaken. The final question came from a long-haired, twenty-something guy in the crowd: “Our local racist, Richard Spencer, if he were here this evening–what would you say to somebody like him?”

“Hello, Richard,” I said into the mic and turned, locking eyes with Spencer, whom I had spotted earlier sitting alone in the first row of the mezzanine opposite from where the question originated. “Let’s have coffee.”

When the last of the attendees cleared out of the O’Shaughnessy Center, it was just me and him. I walked over to Spencer, firmly shook his hand, and thanked him for accepting my invitation. We talked for two hours.

I did a lot of listening that night, paying attention to what we at Life After Hate call “potholes” – things like trauma, abuse, neglect, abandonment, lack of opportunity, untreated mental illness, and addiction – that can detour promising young lives down dark paths. I asked Richard about his childhood and relationship with his father – and how it felt being a father to his own little girl. The idea of masculinity and “aggrieved entitlement” is an important driver in violent extremist movements. I was genuinely interested.

At times, Richard Spencer personified the brash serial scapegoater one would expect. But when I tuned out the familiar rhetoric and listened closely, what I heard instead were the insecure, all-too-human whispers of a man pleading for help – not the bold demagoguery of everyone’s favorite white nationalist punching bag.

It was getting late and I needed to head to the rabbi’s house, where I was staying the night with her family. I bid Spencer farewell, signed a copy of my memoir for him, and we parted ways, agreeing to meet again.

It’s important here I fully acknowledge that my own reality and human connection were once broken, just like Richard Spencer and those demonstrating in Charlottesville. I also recognize that we must stand firm against those who foster hate and divisiveness. But, I wasn’t able to shed my own blinders until my “enemies” – those I had directed my hate towards – took it upon themselves to disarm me with empathy. Ultimately, receiving compassion from the people I least deserved it from, when I least deserved it, was what helped me reconnect with society. To be clear, I don’t shirk away the notion that we must defend ourselves and protect each other against those who wish to harm us, but we must also recognize that violence is rarely ever the place to begin or end a conflict.

Richard Spencer is merely a byproduct of what is happening in America currently – something also amplified by the highest levels of our government, and trickling down through our broken political, education, and justice systems. Let’s not forget the now almost-daily, hate-inspired, white extremist terror attacks like those in Charlottesville, Portland, NYC, Oak Creek, Las Vegas, and Charleston, to name just a few. Not to mention the hate crimes against Muslims, Jews, and people of color that have skyrocketed across the U.S. since Election Day, and the googols of hate speech and misogyny online. People typically hate other people because they fear them, or need a target to project their own pain. Isolation and ignorance breed fear. Prejudices feed the belief in a threatening “other.” More often than not, racists have never even had a meaningful interaction with those they claim to hate. I don’t think I’m blowing anyone’s mind by stating that, as a society, we are largely disconnected and living in alternate dimensions.

How do we solve this? Be the wormhole, I say. Build a bridge between those alternate realities and begin by listening and finding what we have in common: our need for love, security, meaning, happiness. Start there and build on common ground, then address the differences by showing the fearful haters that we are more similar than they believe.

We can only dismantle hate with an outpouring of humanity and a commitment to help repair those metaphorical potholes in people – not with fists, clubs, or fiery rhetoric. Dare yourself to strike a preemptive blow of compassion instead. Don’t adopt the values of the people whose ideas you despise. I’m a different man than I once was. I can’t emphasize enough how repugnant I find Richard Spencer’s ideas – but I do understand how and why he was led to them, and that he needs compassion, not hate or violence, to abandon them. Our two hours together didn’t change him. I didn’t expect they would. But I did plant a seed I look forward to cultivating.

Richard, I still owe you that cup of coffee. Bring your comrades Bannon, Gorka, and Miller with you. You have my number.