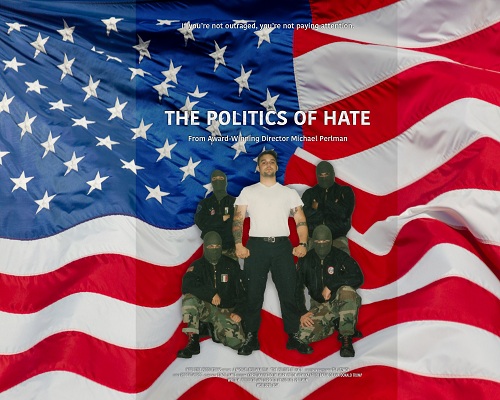 From the award-winning director, Michael Perlman, comes an incredibly-timely film, 'The Politics of Hate,' which documents the last 100 years of hate in the United States, and the interconnection between American and European far-right movements.

From birth of the Ku Klux Klan, to the rise of fascism in the 1930s, to the recent Charlottesville tragedy that resulted from the largest white-supremacist rally in decades, the film examines remarkable similarities between then and now.

Christian Picciolini, a former leader of the American white-supremacist skinhead movement and the author of WHITE AMERICAN YOUTH (Hachette, 2017), explores how so many young people are recruited into violent extremist ideologies and how he now works to pull people out of hate movements.

The film also features Mark Potok, the former senior fellow at the Southern Poverty Law Center (SPLC), an organization at the forefront of monitoring and combating hate, as well as Menhaz Afridi, a Muslim-American woman who serves as an advisor to the U.S. Holocaust Museum and is the director of the Holocaust, Genocide, and Interfaith Center at Manhattan College.

*Proceeds from the film go to Southern Poverty Law Center

Produced by Michael Perlman and World2Be.

SEE THE FILM
Featured Press
Off