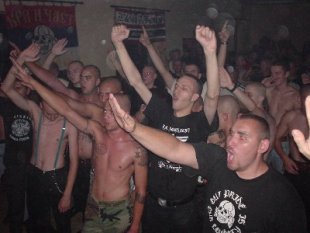 For almost 23 years, Christian Picciolini has been making amends—to his parents, to his children, and to the people he hurt as a leader of America’s white supremacist movement. He tells his story in the recently released White American Youth: My Descent into America’s Most Violent Hate Movement—and How I Got Out (Hachette Books). The book is simultaneously horrifying and redemptive.

In it, Picciolini describes his adolescent self as alienated, furious at the hard-working Italian immigrant parents who seemed to have little time for him and turned off by a school curriculum that seemed irrelevant and meaningless. He had few friends and was subject to near-constant taunts and bullying. A chance 1987 meeting with Clark Martell, an older white supremacist who had been terrorizing the Chicago area for several years, turned Picciolini from a weed-smoking eighth-grader into a fearless racist who thought nothing of beating up strangers as he parroted incendiary rhetoric about “muds,” Jews and queers. Music, much of it coming from English and German neo-Nazi punk bands, was central, both an enticement and a way to unite kids eager to demonstrate their white, heterosexual pride. Picciolini became lead singer of a band called WAY (White American Youth), and performed in and around his Chicago hometown as well as throughout the country and eventually, Europe.

For eight years, from age 13 to 21, Picciolini was deeply immersed in white supremacy. Articulate and charismatic, he quickly become a leader. It was only after he opened his first business, a record shop, and began interacting with diverse customers, that he finally began to grasp how misinformed he’d been. “For one-third of my life, I’d chewed and swallowed grisly bits of twisted ideologies,” he writes in "White American Youth," “and now all I felt like doing was jamming my fingers down my throat and vomiting them all up into the nearest toilet. I felt like a dope fiend, except I was detoxing from selfish power and control, always craving more and living on a razor’s edge, perpetually looking to score the next hateful fix.”